The 2019 season was slightly warmer than normal. Precipitation was well above average for the season.

The 2019 season lasted from April 9th until October 4th. During the season, our field operators made numerous inspections of all the mosquito breeding sites in our district. Treatment of over 5410 acres, or 10,960 individual sites, that were producing mosquitoes were carried out. In addition, 53,034 catch basins were treated with a slow release insect growth regulator to help control the Culex population. Our operations concentrate on larval control, the most effective means of mosquito control, but adulticiding was also carried out in some areas throughout the season. In certain areas residential complaints, excessive mosquito populations, or areas with West Nile positive mosquitoes caused us to spray areas with an ultra-low volume adult pesticide.

Laboratory personnel provide District management with information for planning and conducting an effective and efficient mosquito control program. They survey the larval and adult mosquito populations and test adult mosquitoes for the presence of West Nile Virus.

Larviciding is our primary mosquito control activity. This method involves locating mosquito breeding sites and killing them before they can become a nuisance or transmit diseases. Field operators take larval samples from some of these locations and return them to the lab for identification. During the 2019 season the laboratory identified a total of 2504 specimens from 624 sources. From these 2504 larvae collected, 956 (38.18%) were Aedes vexans, 679 (27.12%) were Culex restuans, 362 (14.46%) were Culex pipiens, 154 (6.15%) were Ochlerotatus japonicus, and 137 (5.47%) were identified as Ochlerotatus sticticus. A total of 14 species were collected. 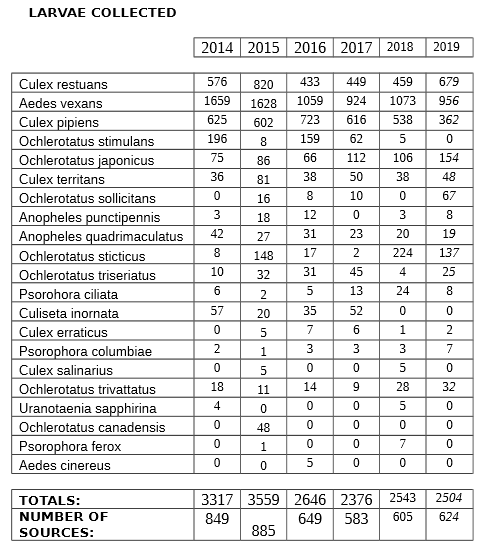 Culex pipiens is the main vector of West Nile Virus in Illinois, Culex tarsalis and Culex salinarius may also be vectors in Illinois but are not very common. Culex restuans is important for spreading the virus in the host bird population. Aedes vexans is the most common nuisance species in Illinois, it appears in large numbers about a week after heavy rains and lives for about a month. Ochlerotatus trivattatus, Ochlerotatus canadensis, Ochlerotatus stimulans and Ochlerotatus triseriatus are also nuisance mosquitoes and may be common early in the Spring in wooded areas. Anopheles quadrimcaulatus is a vector of malaria; however, there is no longer any malaria to spread in Illinois. Psorophora ciliata is the largest mosquito in Illinois with adults nearly an inch long. Ochlerotatus japonicus is a newly introduced species to North America, it was first found in Illinois in 2006 but is quickly spreading and becoming more common.

Adult mosquitoes are tested by the South Cook County Mosquito Abatement District for West Nile Virus. Mosquitoes are pooled, up to 50 individuals per pool, by location, date, species, and sex. A total of 319 mosquito pools were tested with the RAMP system, a commercially available test kit. In 2019, 11 (3.45%) of these pools were positive for West Nile Virus from 8 different locations. 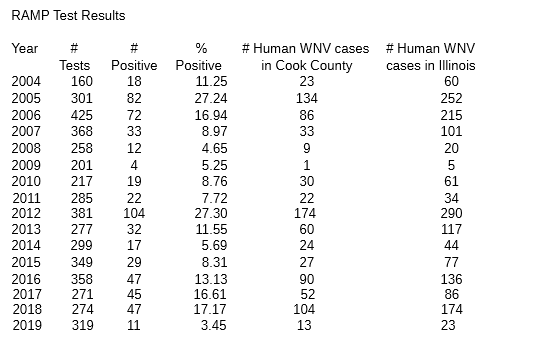 As of December 3rd, 23 human cases have been reported in the state of Illinois, of these cases 13 are in Cook County and 3 are in the SCCMAD.

Zika virus was a major problem south of the United States in 2016 but never became a major concern for the continental US. The mosquito vectors for this disease are Aedes aegypti and Aedes albopictus. Zika can also be spread person to person sexually. Aedes albopictus has been found in the District for at least the last 2 years. They are usually associated with tire piles that have been transported from infested areas. This species seems to be expanding its distribution in the southern US. Aedes aegypti has never been found in the SCCMAD.

Board Agenda and Minutes