There is no insect in the world hated more than the Mosquito. These pests can ruin events, transmit diseases and with a bite, cause an uncomfortable itch. A single successful breeding pair of mosquitoes can create a population of thousands over a period of several weeks.

Our main goal at SCCMAD is to annihilate the mosquito population while it is in the larva stage of its life cycle or the adult stage for the greatest impact of its population. We use a science based Integrated Pest Management (IPM) system to achieve this goal. 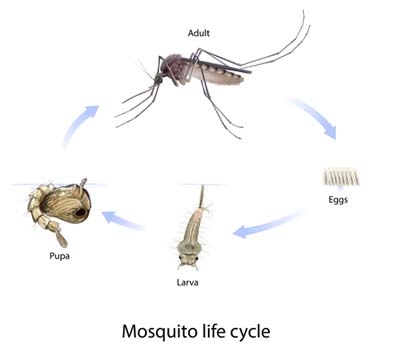 The mosquito life cycle consists of four stages: egg, larva, pupa, and adult. The mosquito is highly adaptable and in certain regions of the United States such as our district, the mosquito will go into hibernation or lay winter-hardy eggs, which hibernate as embryos through the winter. When the weather warms, the process starts all over again.

The life cycle chain needs to be broken and the South Cook County Mosquito Abatement District is not in the fight alone to eradicate these pests, we partner with the community through outreach educational programs and work with government organizations such as the CDC and EPA.

Adult female mosquitoes can lay up to 100 eggs about every third night after mating only once. They typically lay the eggs up to three times before dying. Most mosquitoes lay their eggs in flight while flying over a body of water just dropping them singularly, however some are known to lay their eggs on plants, moist mud and in standing water left over from a rain such as in a tree stump, tire, swimming pool, bucket or anything that can hold water for a period of days.

The eggs, which are cigar shape, will turn into larvae within 24-48 hours of being laid.

At this stage of their life cycle, the mosquito larvae have a well developed head and float at the surface, diving deep when they are disturbed. Larvae swim by utilizing their mouth brushes or by jerking their body, giving them the nickname wigglers.

They feed on algae, bacteria, and other microbes in the surface's microlayer. Larvae breathe through spiracles located on their abdomen or through a siphon that is opposite their head giving them the appearance that they are upside down. 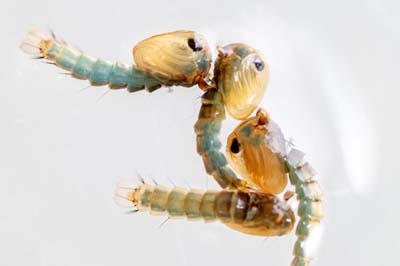 After about seven to ten days as a larva, the larvae stop feeding and transform into a pupa which are shaped like a "comma" with their abdomen curving under the head and thorax region.

A Pupa will normally spend most of its time at the surface of the water breathing through a pair of respiratory trumpets. They do have the ability to swim by flipping their abdomens and will submerge when alarmed. They will float back to the surface when they are undisturbed.

After a few days the Pupa will rise to the surface and split at its thorax and the mosquito will emerge on top of the water where it will dry off its wings and look to mate. Male mosquitoes usually form swarms at dusk and the females will fly through the swarm to mate.

The male mosquito will live 5-7 days feeding on nectar and sugars, while the female looks for a blood meal. After mating the female usually rests a few days as the blood is digested and the eggs are developed.

As with all insects, the mosquito has a body which is divided into three main parts (head, thorax, and abdomen), a hard exoskeleton, six long - jointed legs and a pair of veined wings.

All mosquitoes feed on liquids such as nectar and water, however the female mosquito utilizes a straw-like tube called the proboscis to pierce the skin and drink the blood of its prey. The blood is needed to make her eggs as it is rich in iron and protein.

This is where the sensors and proboscis are located. The head consists of two compound eyes, antennae and the mouth parts which is called the palpus. The Mosquito's head utilizes three type of sensors to home in on their prey, chemical, visual and thermal sensors

This section of the mosquito is where the two wings and six legs attach. It contains the muscles for flight, heart and little steering wings called halters.

The abdomen section hangs from the thorax and serves as the mosquito's stomach and lungs.